Grande Provence has appointed Guy Bennett as new Executive Chef to lead the kitchen brigade at The Restaurant of this historic Franschhoek Heritage Wine Estate.

A seasoned chef, Guy has worked his way up the ranks alongside some of Cape Town’s most celebrated culinary masters the likes of Michael Deg, Bertus Basson, Reuben Riffel and top pastry chef, André Steyn. Guy takes over from Darren Badenhorst, who is opening his own restaurant, Le coin Français, in Fraschhoek. 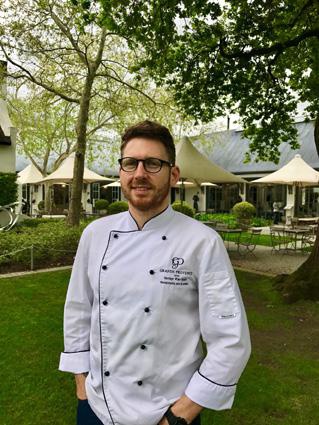 Working with these leading chefs from tiny boutique kitchens to busy international hotels has equipped Guy to understand the diverse needs of his guests. He allows the changing seasons to guide his cooking and constantly seeks new ways of improving what he produces.

“Cooking with passion, day after day, bouncing ideas off my mentors and watching guests enjoying our food, have made me the chef I am today,” says Guy who considers his appointment as Executive Chef at Grande Provence his “biggest and brightest venture to date.”

Guy is a proud Capetonian whose passion for cooking began at his mother’s and Ouma’s knee, and beside the braai with his dad. With his sights firmly set on becoming a chef at an early age and to the surprise of many a classmate, Guy chose home economics as one of his subjects at school. After completing apprenticeships at Savoy Cabbage and Buitenverwachting in his early twenties, Guy joined Reuben Riffel at the One and Only and later moved to The Robertson Small Hotel. He was soon snatched up by Delaire Graff Restaurant where he worked as Michael Deg’s right hand man. His last stint before joining Grande Provence was head chef for Bertus Basson.

When it comes to his own style, Guy is influenced by classic and modern techniques, both local and international, incorporating old and new school approaches to achieving a finished dish. Creating food for all tastes, he includes light, fresh and rich dishes in his menu.

“I consider all the aspects that make up a good dish: sweetness, bitterness, acidity and texture,” adds Guy who considers himself an inspiring team player.

Being centred around a common goal to serve amazing food consistently, is paramount: “Involving my teammates is important to me, allowing them room for input on the dishes they cook and serve. I encourage my fellow chefs to think about food, to be inspired by what they produce.”

Sourcing the best seasonal ingredients and working closely with local suppliers and farmers is another important aspect of Guy’s food philosophy: “I like to know where the produce comes from, who grows it and how they go about doing that. I need to know what I’m working with and that ethical practices were involved. By working closely with producers I know what’s on offer and what is popping up with the change of the seasons,” he adds.

Connecting with fellow chefs has been another life force on his culinary journey: “Unity breeds a passion to keep pushing, and to strengthen South Africa’s food scene on the global map. We bounce ideas off each other, and push each other to create great food.”

While travelling to different food destinations is an important part of his culinary quest, Guy draws inspiration from many different things: “Music, meaningful relationships with friends, colleagues and family, our beautiful surrounds. Being in nature, staying active and fit, and eating out are big priorities in my life. Life is about experiences. There is so much out there to see, taste and absorb!”

Whilst beauty and flavour are important aspects of his dishes, attributes Guy would like to associate with his ever evolving menus are “uncomplicated, accessible, varied and tasty, and always allowing for new creations to make an appearance.”

Guy is a creative chef who lets the produce used and elements incorporated into his dishes do the talking: “I am not a huge fan of smoke screens and magic,” says Guy who believes that food can bring immense joy to people’s lives.

“I’d like to create an experience, a platform of sorts, where diners can put the rest of their lives on pause for a few hours and experience an amazing meal with good company. Great food and wine, an amazing setting and good times.”